Thinking Inside the Prep Room (and outside the box) 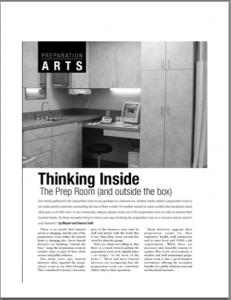 Not many years ago, funeral directors often regarded the preparation room as an after-thought. They considered it merely a necessary part of the business, seen only by staff and interns with the result that it was often dirty, worn out and less cared for than the garage.

Now our clients are telling us that there is a trend toward putting the preparation room in its rightful place – no longer “at the back of the house.” More and more funeral directors are recognizing that the preparation room can contribute added value to their operations.

Many directors upgrade their preparation rooms for their employees’ health, staff satisfaction and to meet local and OSHA code requirements. While these are necessary and desirable reasons to update that work environment, a modern and well maintained preparation room is also a good business investment, offering the secondary benefits of a public relations asset and educational resource.

Edward Mazur of Kapinos-Mazur Funeral Home in Ludlow, Mass., has a good example of how his preparation room helped to increase the range of services by personalizing its use for families.

A family chose Mazur’s funeral home after their son died following a motorcycle accident. The family was offered a visitation room in the funeral home, but they did not want that kind of formality. In this case, the family chose to say their goodbyes in the preparation room.

Proud of his 21st century preparation room, Mazur often give tours, especially to mortuary science students and other funeral directors in his part of the state. Of course, he was just as proud to have a family enter the room for this final viewing.

Another story comes out of Sacramento, Calif. Donald Kellerhall, funeral director at Sunset Lawn, Chapel of the Chimes, services many followers of the Sikh and Baha’i faiths who use his firm’s “operating room,” as he prefers to call it, for purposes of bathing the bodies and dressing them before they are placed in their caskets for services.

“I think that showing the operating room to those who are interested is a good thing,” said Kellerhall. “It takes some of the mystery out of an otherwise secret workplace to most of the public. Some of the TV programs on the subject have done that, but not well.”

The public, at large, does not always understand the death process, and when you, as the funeral director, are able to take away some of the mystery, you gain the invaluable gift of their trust. Opening the preparation room at appropriate times can contribute to de-mystifying shadowy misperceptions and give families a sense of confidence in the total service the funeral home provides.

This was certainly true for Kim Powers, co-owner with Dennis Bridges, of Bridges Funeral Home in Knoxville, Tenn. After a grand opening reception in which they offered the public the opportunity to tour their new prep room, Powers was approached by one of the visitors. “A lady approached me with tears in her eyes to thank me for giving her an opportunity to see the prep room,” said Powers. “it seems that after her mother died, she and her sister requested to see the area where their mother would be spending the night. And as you can imagine, in an old funeral home that was actually a converted house, the sight wasn’t pretty. She told me that it haunted her for over a year, and she still has flashbacks about it.”

The preparation room and what comes out of it – that is to say, the body – is what gives the funeral home its reputation in the community, said Randall Danielson of Johnson-Danielson Funeral Home in Plymouth, Ind. In his opinion, if the room is comfortable for the employees to work in, and if it possesses the amenities that are found elsewhere in the funeral home, the workers feel better about themselves, resulting in a higher presentation.

Rob Moore of Moore Funeral Home in Brazil, Ind., would agree. According to Moore, a state of the preparation room reflects on the integrity of his funeral practice. To this end, he keeps his prep room spotlessly clean, neat and tidy and regularly includes it in tours of his funeral home. He finds that making the room available to visitors helps clear up morbid misconceptions about what goes on “in there”. He actually had one visitor ask, in all seriousness, “Where are the hooks in the ceiling?” She thought that the bodies were hung from the ceiling to let the blood drain out.

With the emphasis on personalized services today, the art of embalming is sometimes neglected, said Moore. Like Danielson, he believes that the most important part of the funeral process is to prepare the body for viewing. Even when cremation is chosen, he thinks that the family wants their last moments to include an image of their loved one as they knew him or her. ago achieve this result, high skills are needed and, indeed, in an efficient and safe work environment, practitioners are able to use their skills to the greatest advantage.

A modern, health-oriented, presentable preparation room is a marketing and educational resource that provides one more tool in an increasingly competitive industry. With proper respect for showcasing the preparation room, “thinking outside the box” can lead to new opportunities for service to the community and enhance business at the same time.