SHELBYVILLE, IN — Freeman Family Funeral Homes, serving the industry currently with three funeral homes, boasts a historic origin dating back to 1880 and the founding of D.B. Wilson and Son Undertakers in Shelbyville. The current operation consists of two funeral homes in Shelbyville: the Carmony-Ewing Broadway Chapel and the Carmony-Ewing Chapel on Harrison Street, plus the Frazier Chapel in Morristown. 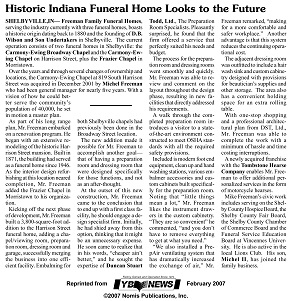 Over the years and through several changes of ownership and locations, the Carmony-Ewing Chapel at 819 South Harrison Street was acquired in December 2001 by Michel Freeman who had been general manager for nearly five years. With a vision of how he could bet-ter serve the community’s population of 40,000, he set in motion a master plan.

As part of his long range plan, Mr. Freeman embarked on a renovation program. He began with an extensive re- modeling of the historic Harrison Street mansion. Built in 1871, the building had served as a funeral home since 1946. As the interior design refurbishing at this location neared completion, Mr. Freeman added the Frazier Chapel in Morristown to his organization.

Kicking off the next phase of development, Mr. Freeman built a 3,800-square-foot addition to the Harrison Street funeral home, adding a chapel/viewing room, preparation room, dressing room and garage, successfully merging the business into one efficient facility. Embalming for both Shelbyville chapels had previously been done in the Broadway Street location.

The new addition made it possible for Mr. Freeman to accomplish another goal— that of having a preparation room and dressing room that were designed specifically for those functions, and not as an after-thought.

At the outset of this new construction, Mr. Freeman came to the conclusion that to end up with a first class facility, he should engage a design specialist firm. Initially, he had shied away from this option, thinking that it might be an unnecessary expense. He soon came to realize that in his words, “cheaper ain’t better,” and he sought the expertise of Duncan Stuart Todd, Ltd., The Preparation Room Specialists. Pleasantly surprised, he found that the firm offered a service that perfectly suited his needs and budget.

The process for the preparation room and dressing rooms went smoothly and quickly. Mr. Freeman was able to re- view and comment on the layout throughout the design phase, resulting in new facilities that directly addressed his requirements.

A walk through the completed preparation room introduces a visitor to a state-of-the-art environment constructed to meet OSHA standards with all the required safety provisions.

Included is modern foot end equipment, clean up and hand washing stations, various embalmer accessories and custom cabinets built specifically for the preparation room. Noting that “little things mean a lot,” Mr. Freeman likes the instrument drawers in the custom cabinetry. “They are so convenient” he commented, “and you don’t have to remove everything to get at what you need.”

“We also installed a PrepAir ventilating system that has dramatically increased the exchange of air,” Mr. Freeman remarked, “making for a more comfortable and safer workplace.” Another advantage is that this system reduces the continuing operational cost.

The adjacent dressing room was outfitted to include a hair wash sink and custom cabinetry designed with provisions for beautician’s supplies and other storage. The area also has a convenient holding space for an extra rolling table.

With one-stop shopping and a professional architectural plan from DST, Ltd., Mr. Freeman was able to complete the work with a minimum of hassle and time costing interruptions.

A newly acquired franchise with the Tombstone Hearse Company enables Mr. Freeman to offer additional personalized services in the form of motorcycle hearses.