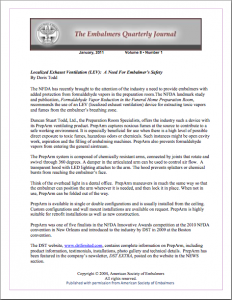 The NFDA has recently brought to the attention of the industry a need to provide embalmers with added protection from formaldehyde vapors in the preparation room.The NFDA landmark study and publication, Formaldehyde Vapor Reduction in the Funeral Home Preparation Room, recommends the use of an LEV (localized exhaust ventilation) device for extracting toxic vapors and fumes from the embalmer’s breathing zone.

Duncan Stuart Todd, Ltd., the Preparation Room Specialists, offers the industry such a device with its PrepArm ventilating product. PrepArm captures noxious fumes at the source to contribute to a safe working environment. It is especially beneficial for use when there is a high level of possible direct exposure to toxic fumes, hazardous odors or chemicals. Such instances might be open cavity work, aspiration and the filling of embalming machines. PrepArm also prevents formaldehyde vapors from entering the general airstream.

The PrepArm system is composed of chemically resistant arms, connected by joints that rotate and swivel through 360 degrees. A damper in the articulated arm can be used to control air flow. A transparent hood with LED lighting attaches to the arm. The hood prevents splatters or chemical bursts from reaching the embalmer’s face.

Think of the overhead light in a dental office. PrepArm maneuvers in much the same way so that the embalmer can position the arm wherever it is needed, and then lock it in place. When not in use, PrepArm can be folded out of the way.

PrepArm was one of five finalists in the NFDA Innovative Awards competition at the 2010 NFDA convention in New Orleans and introduced to the industry by DST in 2009 at the Boston convention.

The DST website, www.duncanstuarttodd.com, contains complete information on PrepArm, including product information, testimonials, installations, photo gallery and technical details. PrepArm has been featured in the company’s newsletter, DST EXTRA, posted on the website in the NEWS section.