THESSALON, ONTARIO — Some 400 miles northwest of Toronto, between Sault Ste. Marie and Sudbury on the north shore of Lake Huron, sits the small town of Thessalon, a community built on timber and tourism. And that is where the Beggs family established their first funeral home. 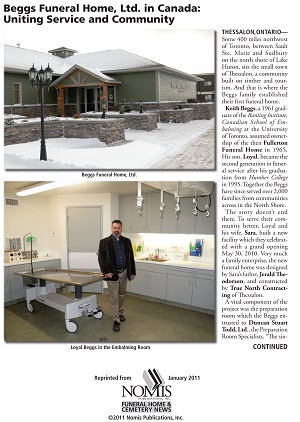 Keith Beggs, a 1961 graduate of the Banting Institute, Canadian School of Embalming at the University of Toronto, assumed ownership of the then Fullerton Funeral Home in 1965. His son, Loyal, became the second generation in funeral service after his graduation from Humber College in 1995. Together the Beggs have since served over 2,000 families from communities across in the North Shore.

The story doesn’t end there. To serve their community better, Loyal and his wife, Sara, built a new facility which they celebrated with a grand opening May 30, 2010. Very much a family enterprise, the new funeral home was designed by Sara’s father, Jerald “eodorson, and constructed by True North Contracting of “essalon.

A vital component of the project was the preparation room which the Beggs entrusted to Duncan Stuart Todd, Ltd., the Preparation Room Specialists. “”e single station embalming room has been a tremendous addition for us,” Loyal Beggs comments, “coming from what would have been a century-old room next year. With the PrepAir HVAC system, the diﬀerence in air quality and lighting is a huge change for us, as is the lift.”

The Grand Opening involved the entire community with local clergy participating in the ribbon cutting ceremony and candlelight dedication of the family’s 45 years of service. More than 300 guests toured the funeral home including the embalming room, prompting area coroners to comment favorably on the state-of-the-art facility and what the Beggs have to oﬀer. “a tremendous feedback also recognized the technological features including webcasting and recording capabilities.

In keeping with the homey, local atmosphere, and the feeling of community unity, the Beggs included works of local artists in the décor. A scene of a horse drawn funeral coach on a country road evokes a sense of the area. Renderings of local area churches are displayed in the chapel.

Through it all, we remain proudly family owned and operated which we believe allows us to provide a level of service that people in small rural communities are accustomed to,” Loyal Beggs aﬃrms.

Menard Funeral Home, a second ﬁrm owned by the Beggs in nearby Blind River, is managed by Funeral Director Ryan Whitehead. By an uncanny coincidence, a Beggs Funeral Home exists in the state of Georgia, and is owned by Keith Beggs. “There is no relationship between the two Keith Beggs families, although they have meet through travel.

Loyal and Sara Beggs are both semi-professional musicians and often perform at area events and conventions. The Beggs are active in local organizations, among them local Junior “R” Hockey, “Thessalon Minor Hockey and the Local Community Choir and the Masonic Lodge of Thessalon.