BRIDGMAN, MI — In August 2005 when a fire completely destroyed the Boyd-Pike Funeral Home in Bridgman, MI, owners Kraig and Rachel Pike chose to look upon the devastation as an opportunity for a new beginning in a new location. 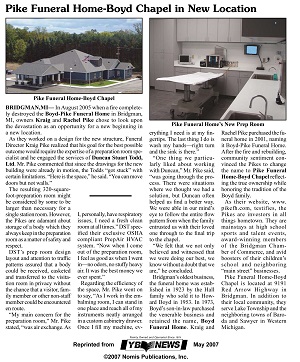 As they worked on a design for the new structure, Funeral Director Kraig Pike realized that his goal for the best possible outcome would require the expertise of a preparation room specialist and he engaged the services of Duncan Stuart Todd, Ltd. Mr. Pike commented that since the drawings for the new building were already in motion, the Todds “got stuck” with certain limitations. “Here is the space,” he said. “You can move doors but not walls.”

The resulting 320-square- foot-preparation room might be considered by some to be larger than necessary for a single station room. However, the Pikes are adamant about storage of a body which they always keep in the preparation room as a matter of safety and respect.

DST’s prep room design layout and attention to traffic patterns assured that a body could be received, casketed and transferred to the visitation room in privacy without the chance that a visitor, family member or other non-staff member could be encountered en route.

“My main concern for the preparation room,” Mr. Pike stated, “was air exchange. As

I, personally, have respiratory issues, I need a fresh clean room at all times.” DST specified their exclusive OSHA compliant PrepAir HVAC system. “Now when I come out of the preparation room, I feel as good as when I went in—no odors, no stuffy heavy air. It was the best money we ever spent.”

Regarding the efficiency of the space, Mr. Pike went on to say, “As I work in the embalming room, I can stand in one place and reach all of my instruments neatly arranged in a custom cabinetry drawer. Once I fill my machine everything I need is at my fingertips. The last thing I do is wash my hands right turn and the sink is there.”

“One thing we particularly liked about working with Duncan,” Mr. Pike said, “was going through the process. There were situations where we thought we had a solution, but Duncan often helped us find a better way. We were able in our mind’s eye to follow the entire flow pattern from when the family entrusted us with their loved one through to the final trip to the chapel.

“We felt that we not only believed and witnessed that we were doing our best, we know without a doubt that we are,” he concluded.

Bridgman’s oldest business, the funeral home was established in 1923 by the Hall family who sold it to Howard Boyd in 1953. In 1973, Boyd’s son-in-law purchased the venerable business and retained the name, Boyd Funeral Home. Kraig and Rachel Pike purchased the funeral home in 2001, naming it Boyd-Pike Funeral Home. After the fire and rebuilding, community sentiment convinced the Pikes to change the name to Pike Funeral Home-Boyd Chapel reflecting the true ownership while honoring the tradition of the Boyd family.

As their website, www.pikefh.com, testifies, the Pikes are investors in all things hometown. They are mainstays at high school sports and talent events, award-winning members of the Bridgman Chamber of Commerce, and avid boosters of their children’s school and neighboring “main street” businesses.

Pike Funeral Home-Boyd Chapel is located at 9191 Red Arrow Highway in Bridgman. In addition to their local community, they serve Lake Township and the neighboring towns of Baroda and Sawyer in Western Michigan.