by Gary Finch
Funeral Home and Cemetary News, May 2011 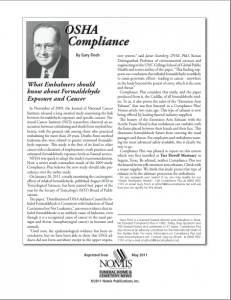 In November of 2009, the Journal of National Cancer Institute released a long awaited study examining the link between formaldehyde exposure and specific cancers. National Cancer Institute (NCI) researchers observed an association between embalming and death from myeloid leukemia, with the greatest risk among those who practiced embalming for more than 20 years. Deaths from myeloid leukemia also were related to greater estimated formaldehyde exposure. This study is the first of its kind to relate cancer risk to duration of employment, work practices and estimated formaldehyde exposure levels in funeral service.

NFDA was quick to adopt the study’s recommendations. Now, a newer study contradicts much of the 2009 study. Compliance Plus believes the new study should take precedence over the earlier study.

On January 28, 2011, a study examining the carcinogenic effects of inhaled formaldehyde, published August 2010 in Toxicological Sciences, has been named best paper of the year by the Society of Toxicology’s (SOT) Board of Publications.

The paper, “Distribution of DNA Adducts Caused by In- haled Formaldehyde is Consistent with Induction of Nasal Carcinoma but Not Leukemia,” uncovers evidence that in- haled formaldehyde is an unlikely cause of leukemia, even though it is a recognized cause of cancer in the nasal pas- sages and throat (nasopharyngeal cancer) in humans and animals.

“Until now, the epidemiological evidence has been in- conclusive, but we have been able to show that DNA adducts did not form anywhere except in the upper respiratory system,” said James Swenberg, DVM, PhD, Kenan Distinguished Professor of environmental sciences and engineering in the UNC Gillings School of Global Public Health and senior author of the paper. “This finding supports our conclusion that inhaled formaldehyde is unlikely to cause genotoxic effects leading to cancer anywhere in the body beyond the portal of entry, which is the nose and throat.”

Compliance Plus considers this study, and the paper produced from it, the Cadillac of all formaldehyde studies. To us, it also proves the value of the “Extension Arm Exhaust” that was first featured in a Compliance Plus/ Nomis article two years ago. This type of exhaust is now being offered by leading funeral industry suppliers.

The beauty of the Extension Arm Exhaust with the Acrylic Fume Hood is that embalmers can embalm with the fume placed between their hands and their face. This eliminates formaldehyde fumes from entering the nasal passages and throat. For employers and embalmers want- ing the most advanced safety available, this is clearly the way to go.

Compliance Plus was pleased to report on this system which was first installed at Tres Hewell Mortuary in Seguin, Texas. Be advised, neither Compliance Plus nor the funeral home sells extension arm exhausts. Check with a major supplier. We think this study proves this type of exhaust to be the ultimate protection for embalmers.

Do you segregate your waste? If so, you may qualify for our “Green Workplace Award”. Call Compliance Plus at (800) 950- 1101 or email Gary Finch at gfinch@kisscompliance.net and ask how you can qualify for this award.