In Dearborn, Michigan, the Muslim community came together to raise funds for an addition to their existing house of worship and in November 2012, Gate to Heaven Funeral Home became a reality. Located adjacent to the Islamic Institute of Knowledge, the new facility is a source of pride and comfort for the local Islamic population of approximately 500,000 that includes 75,000 adherents in the Dearborn and Dearborn Heights area. 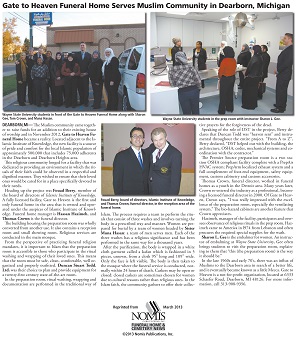 This religious community longed for a facility that was dedicated to providing an environment in which the rituals of their faith could be observed in a respectful and dignified manner. They wished to ensure that their loved ones would be cared for in a place specifically devoted to their needs.

Heading up the project was Fouad Berry, member of the board of directors of Islamic Institute of Knowledge. A fully licensed facility, Gate to Heaven is the first and only funeral home in the area that is owned and operated under the auspices of Islamic Institute of Knowledge. Funeral home manager is Hassan Hazimeh, and Thomas Crown is funeral director.

The building housing the preparation room was wholly converted from another use. It also contains a reception room and small showing room. Religious services are conducted in the main mosque.

From the perspective of practicing funeral religion mandates, it is important to Islam that the preparation room is accessible to those who participate in the ritual washing and wrapping of their loved ones. This means that the room must be safe, clean, comfortable, well organized and properly outfitted. Duncan Stuart Todd, Ltd. was their choice to plan and provide equipment for a twenty-first century state-of-the-art room.

In the preparation room, ritual washing, wrapping and documentation are performed in the traditional way of Islam. The process requires a team to perform the rituals that consist of three washes and involves turning the body in a prescribed way and manner. Women are prepared for burial by a team of women headed by Sister Muna Hasan: a team of men serves men. Each of the three washes has a religious significance and has been performed in the same way for a thousand years.

After the purification, the body is wrapped in a white cloth garment called a kafan which is fashioned in 5 pieces, unsewn, from a cloth 95” long and 109” wide. Only the face is left visible. The body is then taken to the mosque where the funeral service is conducted, normally within 24 hours of death. Caskets may be open or closed: closed caskets are sometimes chosen for women due to cultural reasons rather than religious ones. In the Islam faith, the community gathers to offer their collective prayers for the forgiveness of the dead.

Speaking of the role of DST in the project, Mr. Berry declares that Duncan Todd was “heaven sent” and instrumental throughout the entire project. “From A to Z”, he declared, “DST helped out with the building, the architecture, OSHA, codes, mechanical systems and coordination with the contractor.”

Thomas Crown, funeral director, worked in funeral homes as a youth in the Detroit area. Many years later he re-entered the industry as a professional, becoming a licensed funeral director in 2000. Of Gate to Heaven, Mr. Crown says, “I was really impressed with the excellence of the preparation room, especially the ventilating system.” The bio-hazard cabinets are another feature that he appreciates.

Mr. Hazimeh, manager of the facility, participates and oversees observance of religious rituals in the prep room. He came to America in l974 from Lebanon where he often procures the required special supplies for the wash.

Sharon L. Gee is the embalmer for women. An instructor of embalming at Wayne State University, she often brings students to visit the preparation room, explaining to them that “this (the preparation room) is the way it should be.”

In the late 1960s and early 70’s, there was an influx of Muslims to the Dearborn area in search of a better life, and it eventually became known as a little Mecca. Gate to Heaven is a not-for-profit organization, located at 6333 Schaefer Road, Dearborn, MI 48126. Telephone is 313 908 9356.