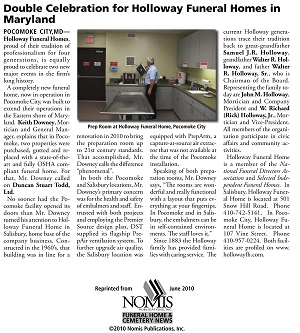 A completely new funeral home, now in operation in Pocomoke City, was built to extend their operations in the Eastern shore of Maryland. Keith Downey, Mortician and General Manager, explains that in Pocomoke, two properties were purchased, gutted and replaced with a state-of-the-art and fully OSHA compliant funeral home. For that, Mr. Downey called on Duncan Stuart Todd, Ltd.

No sooner had the Pocomoke facility opened its doors than Mr. Downey turned his attention to Holloway Funeral Home in Salisbury, home base of the company business. Constructed in the 1960’s, that building was in line for a renovation in 2010 to bring the preparation room up to 21st century standards. That accomplished, Mr. Downey calls the difference “phenomenal”.

In both the Pocomoke and Salisbury locations, Mr. Downey’s primary concern was for the health and safety of embalmers and staff. En- trusted with both projects and employing the Premier Source design plan, DST supplied its flagship PrepAir ventilation system. To further upgrade air quality, the Salisbury location was equipped with PrepArm, a capture-at-source air extractor that was not available at the time of the Pocomoke installation.

Speaking of both preparation rooms, Mr. Downey says, “The rooms are wonderful and really functional with a layout that puts everything at your fingertips. In Pocomoke and in Salisbury, the embalmers can be in self-contained environments. The staff loves it.”